A fond memory of Patrick C.’s childhood is helping his great-grandfather on the farm. In 1967, at the tender age of nine, he killed his first hog. Some might say because of that unique experience he was destined to become a Meat Manager.

During Black History Month, Patrick has graciously agreed to share why his family is his world. “I knew my great-great-grandmother. She lived to be 110 years old,” he said as he pulled out a picture from her wedding day in 1889. Creasy Cockrill was born a slave in 1857.

“I used to listen to the stories she would tell me about washing clothes for who she called the ‘blue coats’ during the Civil War. I reflect more on my family because of individuals like her,” Patrick said. “But as a kid, you don’t take it all in. I would give anything in the world knowing what I know now to be that kid again and listen to what this woman was trying to tell us.”

She was not his only relative to discover the fountain of youth. He had a close relationship with his great grandparents who both lived to be 104 years old. Despite challenges, they all found success. “They were all strong individuals who believed in education and that nobody could prevent you from doing anything that you wanted to do,” he said. “What I want people to take away is that this month is about learning about people and the road certain people have traveled on.”

Eight years serving in the Air Force showed him the importance of working in a diverse environment.  “You can’t have a homogeneous environment where every idea is the same,” he said. “Nobody looks the same or walks the same.” 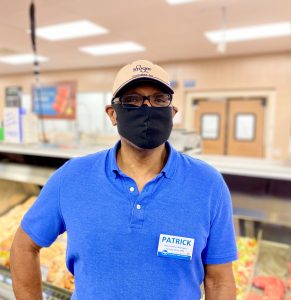 Family stories and life lessons are on the forefront of his mind every time he walks into Store 518 for a shift. “Success is not a group thing, but an individual thing. As a manager, you have to find out what feeds your associates’ needs,” Patrick said.

As he nears 30 years with Kroger, he remembers the people he has met along the way to help him get to where he is today.

“My first manager’s name was Paul, and he was an unbelievable man who I owe a lot to. Greg was another old school meat cutter who taught me how to run the department when I was his assistant. It was a great help to learn how to do this. It all comes down to the people I’ve worked with. That’s why I’ve been here for so long.”

Murals can make a difference

A Taste of Italy

Murals can make a difference

A Taste of Italy