Finding Comfort Through A Necklace

A small two-heart necklace was the only material possession Hannah Perry desperately searched for after losing everything in a fire. The fire had engulfed their Reno County home near Hutchinson, Kansas and tragically took the life of Hannah’s mother and 2-year-old daughter, Charlotte.

“My husband got me the necklace for my daughter Charlotte’s first Christmas to represent the two of us and our family,” Hannah said.

She thinks she lost it in the fire or in the ambulance in the aftermath. A small burn mark around her neck reminds her of its absence.

Deanna LeClair, Hannah’s friend, visited with Fred Meyer Jewelers Store Manager Jeremey Sims and told him of the tragic events. He explained the store didn’t have the exact replica, but it could be recreated as a custom piece. Once Jeremey explained the story to the jewelry dealer, they were all in to give the piece to Hannah for free. Jeremey called Deanna and gave her the wonderful news. Deanna helped to plot the reveal. 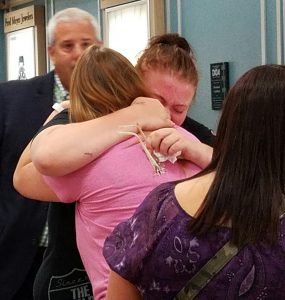 June 9, what would have been Charlotte’s third birthday, Jeremey received the custom piece and reserved it for Hannah. Deanna brought Hannah up to the jewelry store to show her the piece and told Hannah she was receiving it as a gift.

“I’m shocked,” Hannah said. “I don’t want to say that nobody does things like this for people, but you just really don’t expect a store and its employees to do something like that for a customer.” 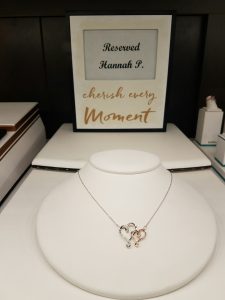 The store team from store #97 donated a floral arrangement for Hannah and arranged a small birthday party for Charlotte. Her nickname was Duck. Charlotte’s father, Dustin, gave her the nickname while Hannah was still pregnant. The store made sure to have Charlotte present during the party and surrounded the three cupcakes with duck toys.

The biggest surprise, however, was the necklace and Jeremey felt gifting it to Hannah was just the right thing to do.

“It was probably one of the coolest things I have ever been able to do,” Jeremey said. “It was awesome to see her reaction. She was so happy.”

Keepin' it fresh no matter how you shop

Memories of a Lifetime

Keepin' it fresh no matter how you shop