The scene is familiar. Familial, even. I’m at my girlfriend’s grandmother’s house for Easter. Her cousin, let's call him Tony, works at an unnamed jumbo-pretzel kiosk in an unnamed mall in an unnamed suburb of Ohio.

As tends to happen at family gatherings, at some point the multi-generational attention-microscope focuses its tractor beam on the adolescent Tony, and questions begin flying about the state of the pretzel industry. Tony tells us about his boss, Travis. Last week, Travis made a parking lot deal to sell all the leftover pretzels from the day’s shifts for twenty dollars. According to Tony, this is an unsanctioned practice, but the brass tends to look the other way, because the alternative pretzel-grave is the dumpster behind the mall. “Why can’t the pretzels be donated to a local homeless shelter?” asks a matriarch. Tony doesn’t skip a beat. He gets this all the time. “Because we use butter, so the pretzels have an expiration date… There are rules, grandma.” This midwestern cul-de-sac is paved with good intentions. Why can’t the food be donated? Because there are rules. The silver lining of the day: asking why we can’t do more to help people. Children innately understand this, asking these questions constantly. ‘Why doesn’t that man have a home?’ ‘Why can’t he come and live with us?’ ‘But … we have a finished basement.’

Fortunately, there are adults who still hold fast to the belief that the world is only as good as we make it, and that the circumstances and barriers preventing us from doing what’s right should be diminished.

At this point, it feels sadly cliché to note the frequency with which we are inundated with images of death and destruction, fear and hatred, and the degradation of our natural world. It’s easy to take in all the bickering and fear and feel depressed or defeated. It’s easy to read a doomsday headline criticizing global responses (or lack thereof) to climate change and feel a sense of extreme pessimism. But to do so would be to deny or discount the extremely difficult work of people and institutions attempting to foment systemic changes in an effort to improve the natural world and our relationship with it. You might be surprised to learn that Kroger is one of those institutions. Yes, your friendly neighborhood Kroger (and Ralphs/Food4Less) is using organic waste to help power a corporate campus in Compton, Calif.

Here’s a simple statement that I’d be willing to bet no one will disagree with: waste is bad. We are constantly wasting. Constantly throwing things away that could be reused, constantly discarding perfectly functioning items because they’re ‘out of date’ or ‘out of fashion’ to make room for new things that will, too, fade into obsolescence. Waste may be part of the human experience, but it shouldn’t go unchecked and it needn’t go unchanged. In fact, I’m going to make the argument, with help from a company working in partnership with Kroger, that reducing and eliminating waste is actually better for business.

To sum up many different versions of the same intelligent think piece: human behavior is much less likely to change than technology. When horses served as the primary means of transportation and cities began to explode in population, no one could figure out what to do with all the manure. It was an unimaginable crisis. And guess what? They never solved it. Instead, gas powered vehicles came around and transportation shifted dramatically. No more poop. I’m pretty sure I heard this on NPR, so it must be true. Steering the behemoth ship of human behavior doesn’t happen without dramatic technological assistance. 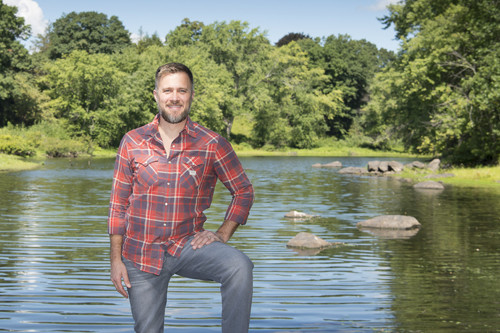 There are few people who understand this concept more than Ryan Begin. Ryan is not boastful, though he could be. He and his team worked with a conventional giant like Kroger to help expand the way they think about food that cannot be sold or donated, bucking a tired old system that was costly and inefficient.

Ryan grew up in Maine and does not view his story as anything out of the ordinary. He’s just a guy who is good at making things work, who loves science and hates inefficiency. “I grew up helping my dad deliver our weekly load of household trash to the local landfill,” says Ryan. “I remember wondering, what happens when this thing fills up? Where will all of this stuff go?”

His solution, a theme of his life, is efficiency; making it easy to do the right thing. Ryan studied electrical engineering in college and after graduating, began working at a startup focused on processes for creating energy by pulling apart water molecules. Although the hydrogen fuel movement did not take off, Ryan caught the \entrepreneurial bug: “To see people pull something together and rally around an idea, that was exciting to be around. I had to be part of it.” After his first foray into the startup world, Ryan went to work for an established company and soaked up knowledge on efficient processes and further refined his engineering chops. Eventually, Ryan made the decision to return to the field of renewable energy and joined a small group tinkering with the idea of turning organic material into energy. “I immediately thought, I want to help drive this. Our exclusive focus from day one has been on supermarkets and supermarket organics, with the goal of eliminating the need for trash trucks to drive to individual stores, and then retaining value from the nutrients locked up in those organics.”

If you’ve ever read a Fast Company article, or seen the HBO comedy Silicon Valley, you will be familiar with the next phase in FEED’s life: iteration. They began with a model that required placing small digester/processors behind grocery stores, but this proved both expensive and inefficient. “We were making the process more difficult than it needed to be.” The solution: simplify and scale; don’t create extra work for grocery store employees, don’t make their jobs any more difficult, make them easier. So, FEED focused on a process called “reverse logistics,” or “backhauling.” If you’re like me and you don’t have a degree in supply chain management, reverse logistics refers to a process by which unused goods, materials, and products are moved away from their usual destinations (in many cases this means the landfill) and instead resold, reused or recycled. Grocers like Kroger-owned Ralphs/Food4Less and others were already using reverse logistics to recycle unsold organics. Before FEED approached them, Ralphs was sorting and moving their unsold organic waste to composting facilities in Northern California. The idea moving forward would be to centralize that process and create a seamless system for capturing unsold organics and turning it into usable energy. Easy, right?

I keep using this term, unsold organics. You’re probably asking, what are unsold organics? Unsold organics are items that come out of the back of the grocery store that can’t be sold or donated. Kroger has doubled down over the years on their commitment to local food banks and pantries (in fact, we’ll be telling that story in a forthcoming article), and donates as much unsold food as possible, but there’s a limit to what the government will allow a grocer to donate. Let’s say you have a container of strawberries and four or five of the strawberries are good, but a few are damaged or bruised. Because of food safety risks, the government deems the whole container as unwanted and unusable. These strawberries are not going out the front of the store and they’re not going to a local food bank. Stale bread, wilted lettuce, overripe bananas, these get culled and thrown in a bin. Next stop: landfill. 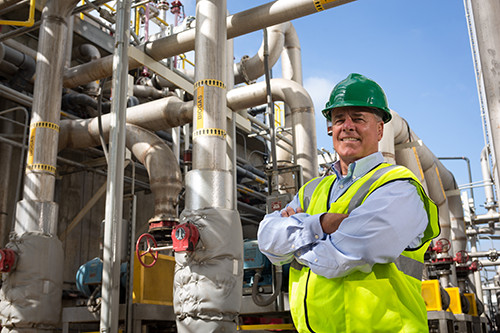 For FEED, the first step in getting people to understand their model was by changing the vocabulary, the project can’t be effective if the communication is not. “Some people just call it garbage,” says Ryan, “but it’s really unsold food. So you have to navigate these conversations, you have to share your ideas, and then it’s about opening up the conversation. It’s about introducing people to the concept that they can save money and resources and actually create energy by rethinking resource management.” After positive conversations and successful piloting, things started falling into place. “You need a strong internal stakeholder to make this happen. And one of those stakeholders from Kroger was Mike Vriens. Mike saw the potential in the idea and started pushing us to address his concerns. Mike is someone who understands the retail industry, the complexity and the importance of making cost-effective decisions. There was a one-year period where the idea was vetted, refined and then ultimately taken to senior leadership at Kroger.”

The idea was born that Kroger and FEED would partner on their very own Anaerobic Digester located on the Ralphs campus, a completely unheard of endeavor. Anaerobic Digesters are somewhat commonplace in Europe and Asia, but they’re just starting to catch on in the US. Kroger decided it was going to be a leader in this space.

What is an Anaerobic Digester and how does Kroger’s work, you might ask? Before moving on, just a warning: things are going to get a little more technical, scientific even. And the science can seem scary and weird, but I assure you, the payoff is worth it.

Here’s how it works today :

FEED Resource Recovery doesn’t just decrease the energy bill. By centralizing food waste management, they reduce the need for waste haulers, decrease the number of trucking miles from over 150,000 to several hundred. According to their website, they process 300,000+ pounds of organics every day, eliminate 500,000+ diesel truck miles annually and provide an 18.5% ROI for Kroger. A giant company, with over 400,000 employees and locations all over the country, is harnessing the power of tiny, infinitesimally small bacterium, that eat infinitesimally smaller fatty acids, which produce renewable energy. This process diverts waste away from landfills, lessens the amount of methane gas being released into the atmosphere, reduces the number of trucks on the road, and therefore decreases the amount of diesel fuel burnt and released into the atmosphere. The impact, not only on Kroger’s bottom line, but on the environment’s safety and security, is compounding. 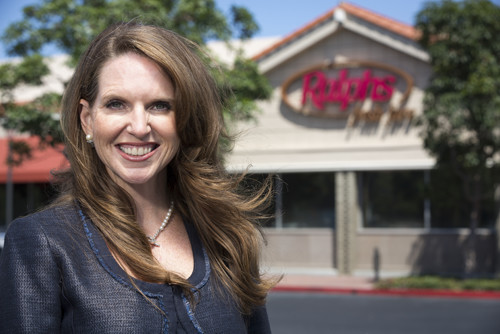 I spoke with Kendra Doyle, VP of Public Relations for Ralphs, who doesn’t see this as just a win for Kroger, but as an incredible opportunity for cities. Navigating government entities and neighborhood interests can be difficult when it comes to trash. Shouts of “not in my backyard!” can be heard from community council meetings and angry Facebook posts, but when people see that the technology actually works, and the process is safe and the facility doesn’t smell, they change their tune. California, a state riddled with energy crises and traffic jams, is thrilled that a company as large as Kroger is relieving stress on the power grid and removing trucks from the road. For Kendra and others at Kroger and Ralphs, this project represents both professional and personal successes; being part of something greater than oneself.

When I read a headline like, Why it’s Too Late to Stop Global Warming, I chuckle to myself and think of FEED and Kroger. We’re not going to flip a switch and change human behavior and we can’t make the world spin in the opposite direction. What I take away from my conversations with Ryan is that we have to flow with the current, not against it. We have to make the solution easier, make it work better, make it more efficient. With persistence and dedication and help from the very world we’re trying to impact, we’ll get there eventually. The tools are right in front of us.

A Day in the Kroger Food Styling Studio

Meeting of the Minds

The Journey of the Roses

A Day in the Kroger Food Styling Studio

Meeting of the Minds